locked out! moved on.

hrrmmm. I got locked out of this blog for a bit and when I got access back, I just didn't bother doing the entire series of posts I was going to do.


But I think that's ok. My life has changed a lot since then and I think maybe it's time for this guy to be done too.


I'm still doing art and still nerding out over here on an irregular basis. More nerding out than art for the moment, but there will be ebbs and flows I'm sure.


I'm getting ready to move to Seattle which is weird/exciting/unexpected. Art has taken a back seat to fixing my hands/spine and getting my life in order, but I'm hoping to get back to it very soon. After I move.


goodbye/hello!
Posted by Nicole at 1:34 PM No comments:

I'm working on a board game exhibit right now (for a class, but hopefully it will be real someday!) and came across this image while doing some research on the game "Sorry." 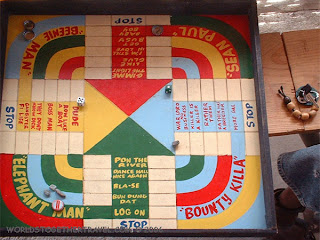 This is apparently a hand-made game that has some similarities to Sorry -- found on this blog about traveling in Jamaica. I would love to see this game in person and play it. Notice that the counters appear to be rocks and bottle caps. Too amazing!
Posted by Nicole at 2:26 PM No comments:

I did this project where I had to paint over street art. It made me feel sick. Posted from my other schooly blog.


Today, because our program is focused on community service, we were all supposed to choose from among several community organizations with whom we'd do some sort of project from 9a.m. til noon. There were a few that I was interested in, but ultimately I chose to do my stint with HAND (Housing and Neighborhood Development.) I wasn't sure exactly what we'd be doing, but having lived in Bloomington for several years, I'm quite familiar with some of the housing issues that happen here in town, so I thought I'd like to at least meet some folks at HAND and see what sorts of things they do. My only previous experience with HAND was when I called to complain about my landlord not fixing my roof.

Our project ended up being painting over graffiti, which I, as an artist as well as being an advocate of emerging artists and public art in general, felt more than a little strange about. However, I feel like it's important to experience all possible facets of a situation when reasonable, so I figured this was a great chance to get a first-hand perspective on what the city's take is on street art.

Here is the art we were expected to help cover up. I didn't get the greatest pictures, but essentially it was two walls that met to form an L, and each one had work by several different artists or writers.

What we were helping with was apparently a "pilot program" in place to help "deal with" (? control?) graffiti in Bloomington. The pieces we were covering were on the walls of a business, and when I asked why it wasn't the building owner's responsibility, Dave (the city worker that was supervising us) said that it was, but that this pilot program was part of helping business owners to deal with the cost of covering the graffiti. The business owners help pay for the paint, and HAND, along with volunteers like us, provides the labor. The paint is one of a few stock colors though, I guess to save money ... so I'm assuming the business owner pays less than if s/he got the exact match.

The idea is that the faster graffiti gets covered up, the less likely it is to keep happening because the artist's work ends up not really being worth the amount of time the work is up. And also that the faster it gets covered, the less likely it is that others will add their tags to the same wall. I don't know if I agree with this philosophy, but that's what Dave said.


I also have some serious doubts about the assertion that the people doing this are trying to be "like big city thugs." I mean, maybe a few of them are. And maybe they're also 12. I think the reasons why people do street art are as varied as the artwork itself. But the city's approach -- and I suppose this is the simplest way -- is to treat it as all being the same.

"Is there any kind of distinguishing factor between art that maybe makes the wall look better than it did before, and graffiti that's not so good?" I asked. The reply was definitely "no." It's all vandalism and it all costs the city money.

I volunteered to go first. It was sort of like painting the walls of the gallery. I didn't feel super bad about it for many reasons, including the fact that I know that when people do this sort of art they do it knowing it will get covered, and also the fact that as I said, although I'm more sympathetic to the artist, I really felt it was important to get this experience of being on "the other side." It was weird, though. Because we weren't covering it to make the wall more beautiful, or even to match the original paint. It was SOLELY to cover this other person's artwork. Which, true, s/he didn't ask permission to put it there, apparently. But I still feel strange about the fact that aesthetics and permission are coming together in this weird, bureaucratic, uneasy way that doesn't make logical sense to me. I can see painting the wall to look exactly as it did before. I don't really get covering graffiti just to cover it.

Dave was an interesting guy. He said that before he'd gotten the job painting over graffiti, he'd been unemployed and making his living scavenging and selling scrap metal. He was either fairly passionate about the graffiti "problem" or very good at seeming he was. But I think he was being truthful. He advised us all to tell our graffiti writing friends that it costs people lots of money to cover this stuff up, and to please ask permission if they wanted to paint on a wall.

I don't disagree with some of the reasoning when it comes to covering graffiti, but I also don't agree with a lot of it. And I certainly don't see how it's the city's responsibility to help business owners paint over graffiti on their buildings, particularly when I don't really see what the city's doing in terms of assuaging the social unrest brewing here (which may or may not manifest in street art -- as I said, there are a zillion reasons why someone might paint on a wall, some political and some not at all and many somewhere in between.) I guess I wish I felt like they were thinking more about what they're doing when they're covering graffiti, and what it means, rather than just making blanket observations and assumptions about it.

At any rate, Dave was really helpful and nice, and I do felt like I learned a lot. Sorry, USE. I did ask if the city had any idea who you were and they said "No."
Posted by Nicole at 9:17 PM No comments:

Places to find me